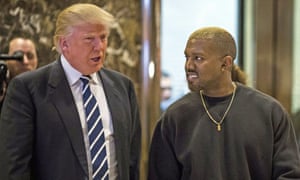 Rapper tweets: ‘He is my brother’ and Trump calls message ‘very cool’ in latest sign of mutual affection.

The working title of the post was, “Kanye, y u no make sense?”

You don't have to agree with trump but the mob can't make me not love him. We are both dragon energy. He is my brother. I love everyone. I don't agree with everything anyone does. That's what makes us individuals. And we have the right to independent thought.

I’m convinced Kanye West must’ve been dropped as a child.

Is that nice to say?  No.  But honestly, sometimes Kanye just sounds way out there and I don’t know whether he’s coming or going or what he’s saying or what he stands for anymore.

Kanye can support Trump as much as he wants.  I just wish he would make sense from time to time.

“Maybe he’s on another level,” I thought.

First there was “Jesus Walks With Me” and Yeezus with songs like, “I Am A God.”

Then there was that time a few years ago when Kanye was on Ellen, and all I could think of was, “What is Kanye saying?”

And his whole social media of late has just been vacuous drivel:

my wife just called me and she wanted me to make this clear to everyone. I don't agree with everything Trump does. I don't agree 100% with anyone but myself.

you can say anything as long as you put the right emoji next to it.

I mean some of his tweets are okay:

I said express love more because we have love but we don't express it. My friend Tmills will always say "I love you" and it used to make me feel weird to hear that. Now I tell everyone I love them. He sparked me to start expressing love more.

to be great is to be misunderstood

truth is my goal. Controversy is my gym. I'll do a hundred reps of controversy for a 6 pack of truth

Harvey Levin of TMZ your hearing from your future president. Let's be friends. Please never use the word erratic to describe a person who is economically and psychologically empowered

Then he goes from “George W. Bush doesn’t care about Black people” to “Trump is my brother”?  Come on now.

Reading his tweets is like reading those books assigned to you in high school English class that you never could understand no matter how hard you tried (Shakespeare anyone? I hated reading The Heart of Darkness.  Sorry Ms. Hommel).  His words are almost cryptic.  Can someone explain Kanye to me? I feel like I need Kanye Coles Notes.

I think the creme de la creme of his foolishness is when he said that slaves chose slavery:

Thank God Van from TMZ put Kanye in his place:

Kanye is fake deep.  He talks and writes like he’s perpetually high.

In the words of Shaun King:

Quinta Brunson (love her) had this to say in reply to Kanye:

Me deleting Kanye’s music and making more room for all the new artists who deserve platforms out here. pic.twitter.com/Zsf4fCUBwx

…and Roxane Gay said it best when she said:

Kanye’s shallow, banal attempts at profundity are… embarrassing and the way people act like he is doing more than offering up trite aphorisms need to recognize.

Maybe I misunderstand Ye?  I don’t know.  I just wish I knew what he was saying.  And if he and Trump both got that “dragon energy,” should we be scared?  One will never know.

Source: Kanye West proclaims his love for Trump: ‘We are both dragon energy’ | Music | The Guardian